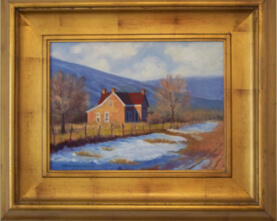 A local businessman with whom I had dealings admired this painting of a typical rural Utah pioneer era home when he saw it on my web site and said he’d like to buy it for his office.
It was a unique transaction, since I did not paint it at his request as a commission.  He said when he saw it he liked it partially because it brought back memories of his youth and partially because he liked the casual painting technique used in its production. Like all of my paintings — both the commissions and the rarer non-commissions — it is usually the capturing of memories that makes them attractive to someone and leads to their acquisition.
I painted this one largely because it stirred my own memories. The faded brick home was reminiscent of my maternal grandmother’s rural home where she raised her family, entertained her grandchildren — and fed them to the point of bursting — and spent forty years as a widow.  The memories were many and varied, but all precious to recall.  Even now, when grandchildren gather, the subject of summer days at Grandma’s invariably comes up and brings both laughter and tears    at the recollection of games played — in daytime and after dark — and the never-to-be-equalled meals.
The photo I keep of that painting still stirs my memories — and, according to the painting’s owner, the original does the same for him.