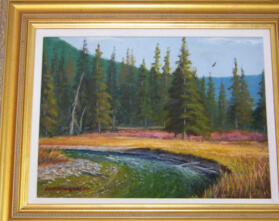 The origin of this painting was a request from a longtime friend in Phoenix.
During a time when the summer heat in Phoenix got well above 100 degrees, he called to say he needed a picture to look at that would remind him of the milder temperatures he enjoyed when he came to Utah to visit in the summer time.  “Just do a painting for me that includes some kind of a mountain scene at higher altitude, with some pine trees and a cold mountain stream,” he asked. “I just need to look at a cooler setting that distracts me from what I’ll feel when I go outside here in Phoenix during the heat of the summer.”
The source of the final painting was a photo provided to me by Kimbal Warren, the professional landscape artist with whom I previously trained. It was a particularly enjoyable painting to do, because of my personal love for the outdoors as well as my love of stream fishing.
Since it was one of my earlier paintings, I sought input from Kimbal on the technique and he taught me a way to paint the clear water so that the rocks on the bottom of the stream were clearly visible, even down to the shadows they cast.  He swore me to secrecy about the “layering” technique he used and I was willing to keep it confidential, especially when I saw how effective it was — even reminding me of summer fishing I had done in similar settings.
My friend was very happy with the painting, saying that it accomplished his desired effect of distracting hm from the summer heat in Phoenix.