A Young Boy With A Snake 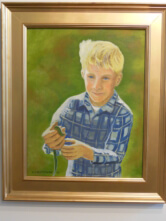 Few pictures carry more special memories than those of children as they grow up, because we see their personalities blossom.

In this case it was a painting of a then-10-year-old boy who had tired of his Cub Scout knot-tying class and had wandered off in search of something more exciting (and alive!). The setting was a regional Cub Scout outing that was intended to teach the young cubs skills that would prepare them for BSA to folllow. In time, those skills would help them earn merit badges and enable them to advance through the ranks of the scouting program to the ultimate rank of Eagle.

A professional photographer assigned by his newspaper to get human interest photos from the Cub outing happened along at just the right time — maybe he too had tired of the knot-tying instruction — to capture the picture from which this painting was done. When the photo appeared in the newspaper, it became the source of this painting.

The look of pride on his face as he holds up his prize water snake is priceless.

That look became the impetus for me to use the newspaper picture to produce this painting of my own son.

No photo was more easily obtained, more of a surprise, or more prized than this one.