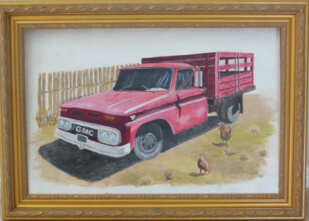 The aging red farm truck, showing the dings and dents of decades of use, now stands idle, no longer ferrying grandpa between the rows of trees in his orchard.  Gone are the long summer days — and their memories — of stacking the truck high with boxes of fruit going to market.

After my neighbor died, his wife’s recollections of him centered mostly on his many years as a fruit farmer.

Whenever we talked about him, she spoke of his spending long days in his orchards, out at the crack of dawn and returning home as the sun set. It was a job that not only lasted as long as there was light each day, but it consumed his time virtually throughout the year. Only heavy winter snow kept him from his trees. There was pruning to do in the Fall, always fertilizing and watering, and when late Spring storms threatened his crops of apples or peaches, he had to put out smudge pots or some form of heaters to salvage the year’s efforts. He literally had to “parent” his orchards to ensure having an income when Summer came and the demand for his fruit reached its peak.

In our discussions, she often spoke of his beloved red orchard truck. Once shiny and new, it now sat idle in her driveway, rusted and dusty with countless miles racked up driving around the orchards, to and from market and wherever else the fruit business required.

It soon became apparent that nothing she could think of recalled him more vividly than the aging red pickup he had driven for years. She remembered just what time each day she should listen for its unmistakable sound as he came home for lunch and then again when he returned home at the end of the long day.

It was obvious then that the subject of a painting in his memory needed to be his longtime companion, the reliable red orchard truck.
And with the truck now owned by a proud grandson, the fruit farmer’s widow has her painting to recall those precious memories.