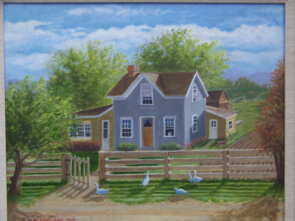 A good friend, now deceased, one day told me he’d like to have a picture of his father’s boyhood home in a nearby town and then asked me if I would paint it for him.

My quick agreement to do such a seemingly simple task turned out to be naive.  It seems that the home had been remodeled and re-remodeled countless times with additions and additions to the additions being commonplace.  And the real challenge was that apparently no one was still living who could unravel the history of the building and rebuilding of the home since the days when my friend’s father lived there.

But we got a break.  My friend’s cousin, now living in the frequently remodeled home, was a builder and had enough interest in the how, why and when of the revisions by earlier builders to have questioned some of the previous occupants about the history of the many changes.  From those conversations, he had put together an apparently accurate timetable of the alterations.  He had talked to people — or talked to people who had talked to earlier people — from enough different eras to be able to confirm the history of the house back to my friend’s father’s era.

With this help from my friend’s cousin and indirectly from his deceased relatives, we had finally figured out what the house had looked like way back when my friend’s father was growing up in it. We were even able to verify where the outbuildings were, where the garden plot was, and the well, etc.

It was neither easy nor quick, but in the end the sleuthing was very satisfying to all when the paint on the picture was dry and the painting delivered. My friend even had a copy of the painting made for me, to recall the challenge we had gone through.